An introduction to Racetech Manufacturing

Based in Wellington, New Zealand, Racetech operates on a global basis. Racetech has an extensive international dealer and distributor network, supplying motorsport seats, harnesses and accessories.

We’re proud to say that we are world-renowned for our Racetech race seats. Our composite and carbon fibre race seats are fitted to thousands of race cars – touring cars, rally cars, drift, drag and speedway cars – all over the world, as well as many race boats and other sport seat applications.

The design, testing, manufacture and sale of our comprehensive range of Racetech race seats forms the heart of our business and we also distribute and sell numerous other top class race products.

Racetech has worked, and continues to work with the Federation Internationale De L’Automobile (FIA) on numerous development and testing projects, and our team is regularly consulted by national motorsport organisations regarding appropriate technical standards and improved safety within racecars. As an example of this in 2003 Managing Director, David Black, was invited by the FIA Institute to assist in developing the new 8862-2009 seat standard. This standard founded many of its regulations on earlier work done in collaboration with Dodge and the Viper project.

You’ll find Racetech personnel won’t hesitate to ‘tell it like it is’ and provide concise facts about any of our products. Racetech helps set the safety standards, then delivers the right products.

Safety is a serious matter. That’s why our expert team is passionate about the tiny details of seats, harnesses and other vital components of your racing machine that really do make a difference in terms of safety. After all, there’s always a risk of damage in any form of competitive motorsport, but we must do all we can to reduce the likelihood of injury to you, the motorsport competitors of the world.

Some simple philosophies and facts about motorsport crashes:

The latest ranges of Racetech race seats have a unique and patented back mount distinguishing them from competitors’ offerings.

A Racetech seat’s lack of flex during impact – due to the back mount – is a key reason a Racetech seat is the world’s best. Mounting the seat from the back, in addition to the traditional floor mount, enhances the driver’s feel of the race car. Why? Because there’s a lack of flex in the shoulder area which also helps reduce driver fatigue and improves driver safety. Tests have also shown that chassis stiffness is enhanced due to Racetech’s unique six-way mounting method which helps improve car handling and the ability to tune the chassis.

Developed in collaboration with the FIA, Racetech seats are used by some of the world’s leading teams and constructors, including the whole field of the Swedish TTA, 26 out of 28 Australian V8 Supercars, the FIA World Rally Championship, the British Touring Car Championship and in offshore powerboat racing.

Racetech seats are some of the strongest, safest and most supportive seats available.

Our top-of-the-range seats have unique features such as: 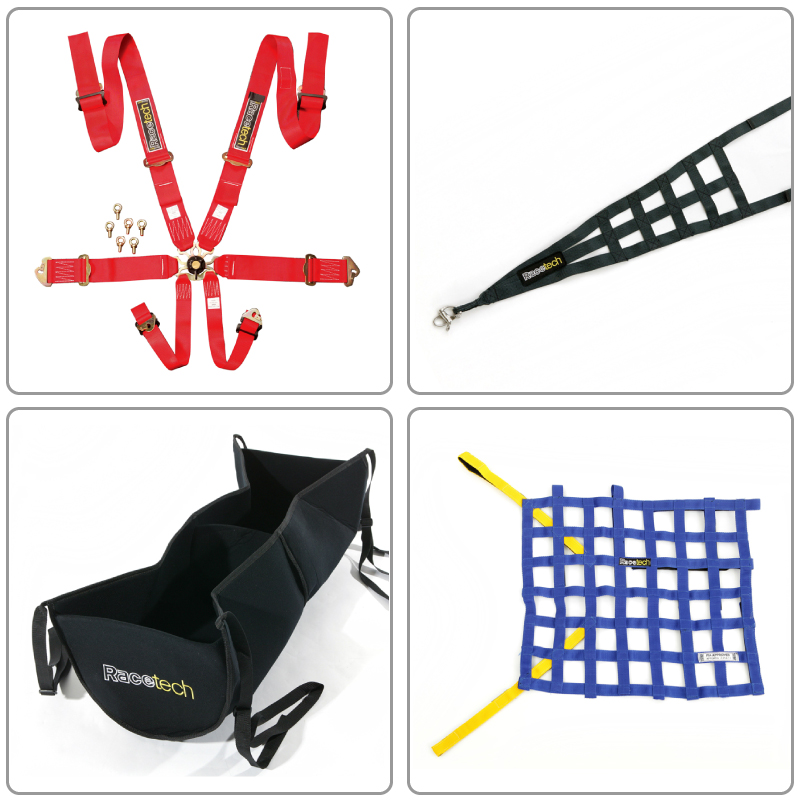 Racetech harnesses and side-nets complement our range of race seats and enhance the safety package in your racing car.

Racetech side-nets were developed in conjunction with Dodge during the Comp Coupe project in 2002 and have been tested with great success in the US market. V8 Supercars are now adopting this vital additional, cost effective safety product.

Racetech is headed by David Black and it’s no secret that motorsport safety is his passion.

Drawing on his own experience as a championship-winning competitor, David understands the need to balance cost vs. having the right equipment to effectively protect racers in the event of a crash. He’s also experienced first-hand the results of severe impacts in a rally car.

When he bought Racetech in 1998, the company was essentially a one-man operation. In less than five years from that time, David had personally started to amass a wealth of scientific and technical knowledge which put the company well on the path to its current position as a world leader in race seat design and engineering.

Facts talk in the safety business and that’s why you’ll find David now heads a team of detail-conscious, data-driven designers, engineers and fabricators.

2003 – Invited by FIA Institute to participate in development and crash test programme at Delphi, Ohio, USA.

2010 – Invited to present at IMIS Safety Conference, Indianapolis on the development of carbon race seats

2012 – Establish clear plan for development and growth of Racetech